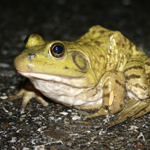 Bullfrogs (Lithobates catesbeianus) are the largest frogs in the Valley reaching as much as 8 inches in snout to vent length. Miss-identification is easy between Bullfrogs and Green frogs as they share the same habitat and overlap in size. The main difference is that Green frogs have dorsal folds and Bullfrogs do not. Females eardrums are about the same size as their eyes, males are nearly twice as large. Males also develope a beautiful yellow throat color durring mating season. They emerge from hibernation at the same time as their much smaller relatives but are the last to breed. Bullfrogs and Green frogs prefer more permanent bodies of water like marshes, swamps and lakes as their tadpoles may take 2 years to metamorphous.
Vocalizations: The Bullfrog has a very deep and resonating call. As soon as one male begins calling, another close by will often begin. The "ru-ru-rum" sound is repeated several times as they float on the water surface, often moving about defending their territories against other males. I have also witnessed their displeasure with Green frogs that are skirmishing nearby. They have several calls, ranging from a burpy warning sound to a scream when they are being attacked. 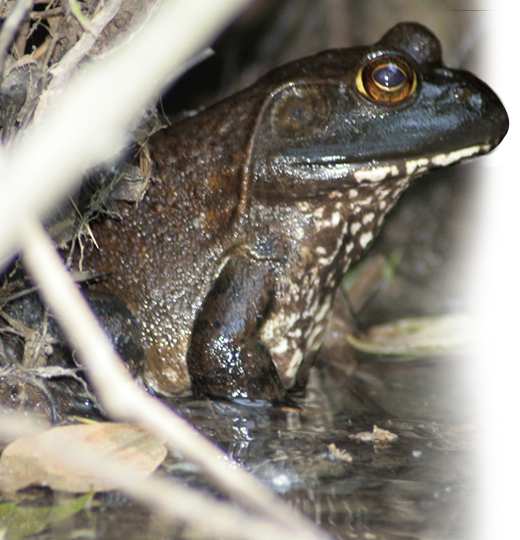