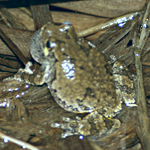 Gray Treefrogs (Hyla versicolor) share the Wood frogs ability to become partly frozen. They produce glycerol which reduces the damage done to cells by the ice crystallization process. They begin calling mid April, after American toads, Leopards and Pickerals have gotten a good start. Coloration can vary greatly from a bright green overall to pure grey with subtle markings. Aiding their camouflage is a green patch under the eye that matches perfectly in color and size to lichen patches on tree bark. The inner thigh is a bright yellow which contrasts well with the leg banding. Gray Treefrogs (Hyla versicolor) and the Cope's Gray Treefrog (Hyla chrysoscelis) are identical in appearance and in the field can only be distinguished by their call.
Vocalizations: They have a very unique high pitched trill that carries far. After their extended mating season draws to an end, they return to the trees and often can be heard before or after a good thunderstorm. They have a unique territorial call comprised of a series of high pitched pulses used before the physically drive the intruder away. Cope's Gray Treefrog's have a less musical and flat sounding trill which is shorter in duration. 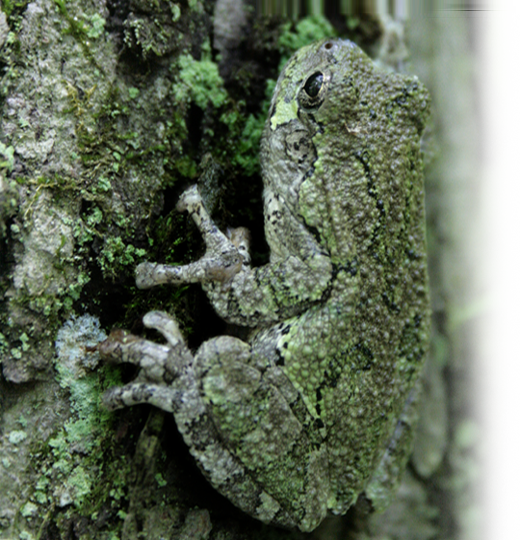