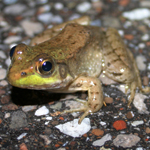 Green Frogs (Lithobates clamitans) and Bull frogs are easily mistaken for the other. The tell tail sign is that Green frogs have dorsal folds extending down their dorsal surface. Both species have a fold around the tympanum. The male (shown on the left) has an eardrum approximately twice the size of the eye, females eardrums are about the same size as their eye. During breeding season, which begins around the beginning of May, males will take on a very bright yellow throat as shown. Green frogs breed in large, more permanent bodies of water, as the tadpoles overwinter before metamorphosing. They are interesting to watch and listen to as males defend their territory with a series of different calls and warnings. They will swim about and challenge intruders often leading to "wrestling matches" where the loser is driven away.
Vocalizations: The main broadcast call sounds like the plucking of a banjo string repeated in a descending fashion 3 or 4 times. When other males approach or if there is a perceived danger, they make a rolling lower pitched type of growl that is very unlike their broadcast call. I have heard this call in response to a nearby thunder clap. 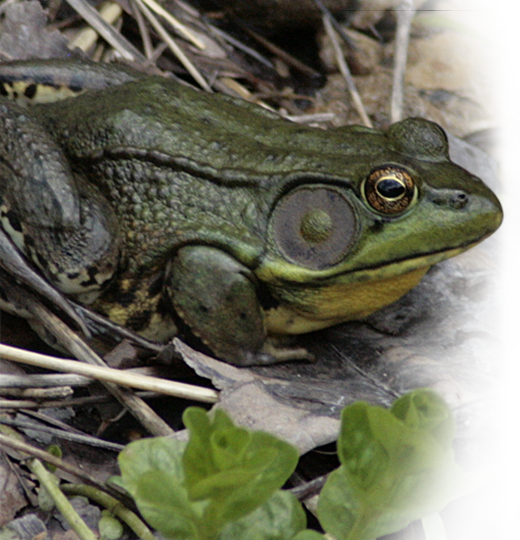